From Johann Hari at The Independent:

It was a dark year, 2009, sealing a dark decade. It began with the world in economic free-fall and the Gaza Strip being bombed to pieces (again). We watched the vicious crushing of a democratic uprising in Iran, a successful far-right coup in Honduras, and the intensification of the disastrous war in Afghanistan. It all ended at Brokenhagen, where the world’s leaders breezily decided to carry on cooking the planet.

But in the midst of all this there were extraordinary points of light, generated by people who have refused to drink the cheap sedative of despair. The left-wing newsman Wes Nisker said in his final broadcast: “If you don’t like the news, go out and make some of your own.” I want – in the final moments of 2009 – to celebrate the people who, this year, did just that: the men and women who didn’t slump, but realised that the worse the world gets, the harder people of goodwill have to work to put it right.[who Hari thinks helped to put it right] 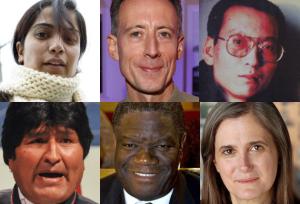