I just can’t think of a better way to celebrate the 100th anniversary of International Women’s Day than with this: 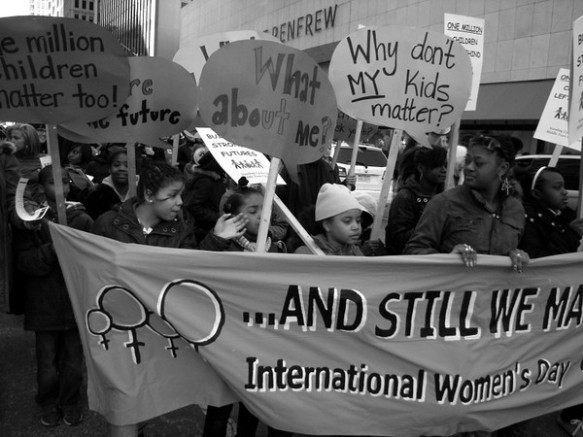 My response to CBC’s documentary “The F-Word:  Who Wants to Be a Feminist?” is up at rabble.ca.  Here’s a bit:

One of the framing questions asked by the film is “where did feminism go wrong?” In getting to the answer the film outlined some of the goals and objectives of “second wave” feminism. But if this means the status quo is represented as the answer to the question of where feminism went wrong, the answer will focus only on the shortcomings of the second wave.

There would be something to be grateful for here, too, if the documentary makers had focussed on those “failures” in their socio-economic and political context. The pressures of neoliberalism over the last two decades have led to the marginalization of many liberation movements, feminism is just one of them. The critical issue for contemporary movements is to understand how that happened and, of course, that means critical analysis of the goals and strategies of the movements themselves.

But the exclusion of this type of context in the documentary rendered it inaccurate, unhelpful and defeatist.

Did the doc at least get its history of the Canadian second wave right? Absolutely not.

Check it out here.

In 1911, the first International Women’s Day marches were held across Europe. A few days later on March 25, 146 immigrant women were killed in the Triangle Factory firebecause the bosses locked the doors from the outside. Russian socialist Alexander Kollentai proposed that the next year IWD would honour these women and the theme of IWD became bread and roses and the date March 8.

At the time, most women workers in Canada were domestic or textile workers. As soon as they got married or pregnant they were fired. They made up to 80% less than men for the same job. So the demand for bread was obvious.

As the song Bread and Roses, which has become an anthem of the women’s movement says, “Hearts starve as well as bodies, give us bread but give us roses.” The rose is a powerful symbol of the female and of love. That symbol comes not only from its beauty but also from its tenacity. The rose bushes in my garden still have leaves on them in early winter and they bloom almost until the frost.

The rest is here.

Givin' Me a Break